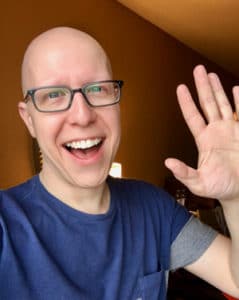 Hi! I’m Justin. I’m an author and social activist with 20 years’ experience working for nuance and understanding on controversial issues. I live in Orlando, Florida, right next to the Magic Kingdom.

Here are a few things you might want to know about me.

I’m a geek. I love board games, technology, pop culture, video games, film, theme parks, useless trivia, and all sorts of other geeky things. I’m a nerd, too. I embrace it.

I’m a Christian. I grew up in a Southern Baptist home, and when I was young, I had a reputation for being obnoxiously preachy. Thankfully, I grew out of that phase, and today I work to encourage my fellow Christians to be more like Jesus—who stood up for outcasts—and less like the hypocritical, judgmental religious leaders Jesus condemned.

I’m gay. Growing up Southern Baptist, I thought gay people were sinners who had made a sinful choice to be gay. When I realized I was gay, it turned my world upside down. How could I be gay? I was a good Southern Baptist boy! But that realization started me on a journey that changed my life.

I first became known as an LGBTQ Christian leader. I founded and ran a prominent LGBTQ Christian organization for 16 years, where I focused on changing anti-LGBTQ attitudes in the church and providing support to those whose families, churches, and communities did not support them.

My first book grew out of that work; it’s called Torn: Rescuing the Gospel from the Gays-vs.-Christians Debate. I’m honored at how widely it’s being used to help even very conservative Christians accept their LGBTQ loved ones.

Thanks to the book and my advocacy work, I’ve been invited to speak across the U.S. and around the world, and I’ve been featured in a number of media outlets, including Dr. Phil, Anderson Cooper 360, All Things Considered, The Advocate, The Christian Post, and The New York Times.

My new book is about changing hearts and minds in a polarized world. Through all of that speaking and traveling, I’ve learned a lot about why we’re so polarized. I’ve seen how conservatives and liberals look at issues differently, the wrong assumptions they make about each other, and why we all have so much trouble communicating about the issues we care about most. So I decided to write about that.

My new book is called Talking Across the Divide: How to Communicate with People You Disagree With—and Maybe Even Change the World.

It’s about what I’ve learned from those 16 years and the principles you can use to change hearts and minds on the issues you care about in our polarized society. It’s now available for preorder from Penguin Random House.

So, hi! Welcome! This website is about both the serious and the silly. I hope you’ll join me for conversation about making our world a better place, but I also hope you’ll geek out with me about the fun stuff in our everyday lives.