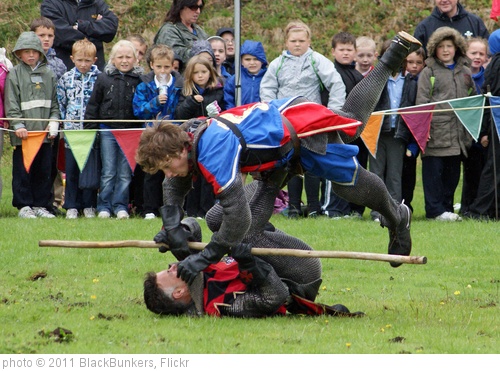 I have two friends—let’s call them Charlie and Stuart—who don’t get along.

They are both really awesome guys. I enjoy hanging out with both of them. They’re both well-liked, and they both get along with my other friends.

But put them in the same room together, and you can almost feel the temperature of the room drop a few degrees. They seem to be incapable of having a conversation without trading barbs.

Ask either one of them why he so despises the other, and he’ll quickly give you a list of perceived wrongs: “I will never forget when he said such-and-such to me.” “He never apologized for the time he humiliated me at that party.” “Do you know what he said to me the last time we talked?!”

But ask him about the wrongs that the other has listed, and you’ll hear a different story: “That’s not what I said,” or, “He’s blowing that out of proportion,” or, “Yes, I said that, but only because of what HE said first!”

That last one is a big key. Over the years, these two guys have built up so much resentment toward each other that they now interpret every minor annoyance as part of a pattern of unkind behavior—a pattern that, in their minds, justifies their own lashing out and cold shoulders and other less-than-charitable responses.

“Yes,” each side seems to say, “maybe I do sometimes do things to irritate him, but he deserves it! After all, I’ve been more than understanding as he’s heaped injustice after injustice upon me, and there comes a point where I just can’t take any more! I’m not superhuman, you know, and I have to stand up for myself sometime!”

But of course that act of “standing up for myself” adds fuel to the other one’s fire, providing just one more justification for his own anger and frustration.

Do you know people like this? Do you ever get caught up in other people’s feuds? From an outside perspective, it’s obvious that one side or the other will have to swallow their pride and break the cycle. But woe to you if you even suggest such a thing! Both sides are convinced that they’ve been terribly wronged, and they can greatly resent any implication that they are in any way at fault for the cycle’s perpetuation. (“You’re taking his side now? Can’t you see how horrifically he’s treated me? I’m not the one who needs to apologize!”)

In other circumstances, Charlie and Stuart might just avoid each other, but they run in the same circles and have many of the same friends. Their friends really want them to get along, but everyone’s too scared to say anything that might come across as taking sides.

The other day, I was hanging out with Charlie, and I asked him about trying to break the cycle. Couldn’t he be the bigger person and offer forgiveness to Stuart, even if it seemed undeserved?

In response, he laughed bitterly. “I tried to reach out,” he said. “I did. I was nice, I was gracious, and in response, he practically bit my head off.”

I suspect that after all this time, Stuart has become so conditioned to seeing Charlie as the enemy that he didn’t even recognize when Charlie was trying to be nice. Charlie, for his part, wasn’t willing to be patient enough to keep trying. When Stuart rebuffed his attempt to repair the relationship, Charlie retaliated in a way that only damaged the relationship further. When I asked Stuart about it, all he remembers is Charlie’s angry retaliation. He doesn’t seem to be aware of any attempt to make nice.

“What do you mean, ‘He tried to make things right’?! Do you know how he just treated me?! You can’t move on from something like that,” Stuart said.

So these two truly awesome individuals have become bitter and angry, bringing out each other’s worst traits. And they’re not the only people in such a situation, either. I see this story play out time and time again in other people’s lives.

It’s even happened in my own life, though I didn’t realize it at the time. Someone I knew was treating me abominably, and as far as I was aware, I hadn’t done anything to him. When other people asked me about him, I told them quite honestly that he struck me as a jerk and a bully. Only later, when he and I finally talked about the situation, did I discover that he had behaved the way he did because of perceived hurts from me that I hadn’t been aware of—and my unkind comments to others about him had only further served to convince him that I was a terrible person. We both apologized, and had to work hard to repair our friendship. (Eventually, we succeeded.)

It’s easy to see the folly of the cycle in other people’s lives. But what about our own? We’ve all been mistreated by others, and we’ve all had occasions to respond in anger or frustration, feeling that our own reactions were justified by the far worse treatment we’d received.

But there’s a reason Jesus said to “turn the other cheek” when someone strikes you. No, you shouldn’t stay in an abusive situation (physically or emotionally), but as Christians, when we are wronged, we’re called to forgive, not to retaliate. Yes, maybe the other person’s words or actions were reprehensible. Yes, maybe our retaliation would be “justified.” Yes, maybe the other person has never fully acknowledged the need to apologize. But we are called to forgive anyway, and to avoid holding a grudge. We are called to recognize the other person’s flawed humanity, to realize that we, too, are human and do bad things, and to move on from the pain. Don’t return to a place where you’ll be abused over and over, but don’t perpetuate a cycle of anger and revenge, either.

Are you holding anger in your heart against someone who’s hurt you? Maybe it’s time to forgive, and to show them grace. Even if they never acknowledge it, even if they throw it back in your face, give it over and over again.

Do they deserve it? No.

But that’s what makes it grace.