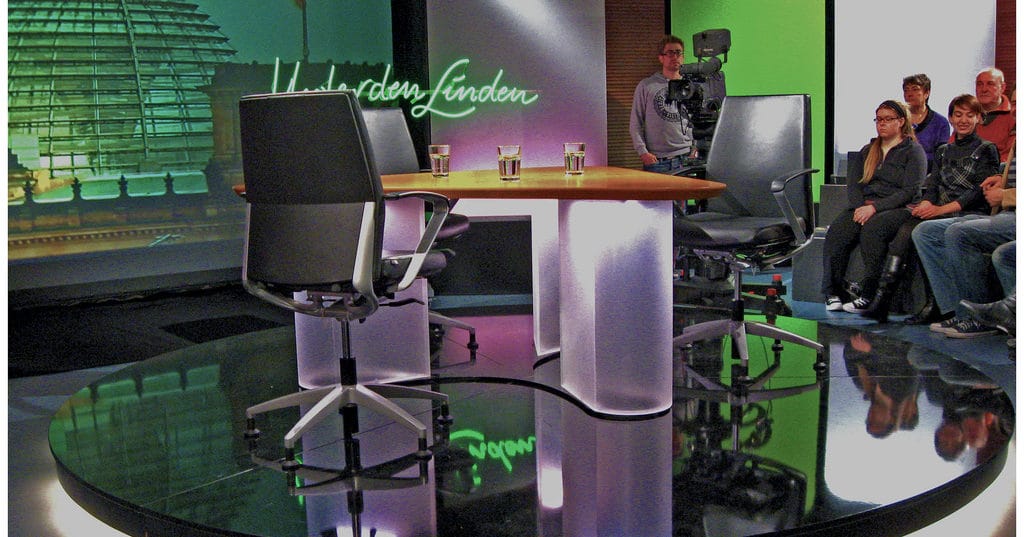 Let’s say you’re a normal person, and you live a normal life. Well, it seems pretty normal, anyway. You’re not famous; no one stops you at the grocery store to ask for your autograph while you’re wandering through the produce section or anything like that. No, you spend your time in the produce section pretending to know how to tell which artichokes look good and debating about whether you’re lazy if you buy bagged salad.

So yeah, a normal life. But then there’s this one little thing. Maybe you wrote something. Or maybe you spoke up for a cause. Or maybe something unexpected happened in your life, and suddenly you’re the poster person for some story and NOW YOU’RE GOING TO BE ON TV.

Egads! What do you do?

Well, you hop on over to your good friend Justin’s blog, because he’s been on TV a few times, and you read something he just posted about what it’s like, because he thinks it’s kinda weird, too. Then you’re at least partially prepared for all the insanity… because trust me, there’s a lot of insanity.

The first thing you notice is that you never really know if you’re going to be on or not. In the world of topical TV, everyone flies by the seat of their pants. Kinda like the Lorax.

You might get a call from a producer or someone, letting you know that they’re thinking about maybe doing some kind of show that might relate to the topic you care about. Maybe the show will be about this… maybe it will be about that. Maybe it won’t happen at all. They’ll act like this is no big deal. You’ll pretend it’s no big deal to you, either—then you’ll hang up the phone and run around the house screaming like Yosemite Sam with his pants on fire.

You’ll then spend every waking moment—and some sleeping moments—freaking out about whether or not this show is going to happen. What will you say? What if you mess everything up? Meanwhile, with every phone call, the situation will change.

“Hi, Jane. It’s Shawn from Dr. Ellen 360. We’re thinking that the show’s going to be a 15-minute expose on catfish farming. You’ll be in the audience as a special guest. Maybe. We’ll let you know.”

“Hi again, Jane. It’s Shawn from Dr. Ellen 360. The catfish are out; we’re now talking about how the Popemobile influences auto design in a post-bailout world. Bring photos of your car. We’ll find a way to work them in. Also, it’s a 5-minute segment now.”

“Jane? Shawn. One of our other guests canceled, so the Popemobile is out. You’re now on the main stage and we’d like you to monologue for an hour about your life. We might also throw some current-event questions in there, so be prepared for anything. Also, we’re pushing up filming; your plane leaves in 90 minutes.”

You, the one who plans what to have for dinner a week in advance, find yourself suddenly on a plane on the way to Los Angeles or New York, which are apparently the only two cities in America with television cameras, with all kinds of thoughts racing through your mind: Will this outfit look good on camera? What am I going to say? Did I leave the iron on? What’s my name again?

At the airport, you follow the crowd of people off your plane and then stop dead in your tracks when you get to baggage claim. There’s a guy in a suit standing there holding a sign with your name on it. Like in the movies. Oh. My. Gosh. You look around to see if anyone else has noticed how cool this is, but they’ve already walked past you. Sadly, there’s no one left to witness your celebrity moment as you stroll up to the Man in Black and go, “Me! Me! That’s meeeeeeeeeeeeeeeeeeeeeeee!”

He’ll never guess this is your first time. You’re smooth like that.

In the car on the way to the studio, it will occur to you for the first time that you have no idea whether you’re supposed to tip this guy. Surely someone else has taken care of that, right? Right? Should you tip anyway, just to be sure? What’s in your wallet? Hmm, a half-used frozen yogurt gift card and a frequent sub coupon.

It will also occur to you that you’ve taken this guy on faith, because he had a sign with your name on it. You have no idea who he is, and you’ve just gotten into a car with him. If this is a movie—and it sure feels like one—he could have intercepted the real driver, killed him off, and taken his place. The whole thing could be a sham. Maybe there’s no TV show, this guy is a deranged killer, and he planned the whole thing just to get you here! Why, oh why, didn’t you leave extra food out for the cat?

You’ll get to the studio—though if this is L.A. or New York, you may celebrate one or two birthdays on the way while waiting for traffic—and it will turn out to be kind of less glamorous than you imagined. It’s just sort of a normal building with offices and stuff, all filled with normal people walking around, acting as if making hit TV shows were the most boring thing in the world. You consider grabbing someone and yelling, “I CAN’T BELIEVE YOU’RE AN ASSISTANT TO THE ASSISTANT PRODUCTION TECH ASSISTANT ON THE DR. ELLEN 360 SHOW!!!! CAN I HAVE YOUR AUTOGRAPH?!” but you suspect this might make you seem like you don’t do this all the time, so you just say, “Um, hi, I’m Jane. I’m here for the taping?”

Only your name isn’t Jane. Why have they been calling you Jane all this time? Wait, what is your name?

They give you someplace to sit, which might be a dressing room or a hallway or a bathroom, and you kinda hang out for a while and start seriously freaking out about the show. You had memorized a few key things you wanted to say, but you’ve forgotten them all now. Now you’re just trying to remember how to put words together into a sentence so you don’t look like a babbling fool on camera. Subject, verb, object….

Producers and assistants and techs and hair and makeup people come see you, and they have conversations with you about your clothing choices and your skin tone and where you’re going to put the microphone—unless you’re expecting those conversations, in which case they say none of those things to you and you start freaking out yet again, wondering if they just considered you a lost cause and have already decided to leave you on the cutting room floor.

They might ask you to tape a segment for pre-show material, which basically consists of them putting a camera in your face and telling you what to say.

“Okay, Jane, next, I want you to look at the camera, smile real big, and say, ‘Mmmm, delicious!'”

“Wait… what am I saying ‘delicious’ to?”

“Don’t worry about it. It will all make sense when the final show airs. Just say it.”

Then more waiting. And waiting. Just enough to make you get nervous and sweaty before they come grab you and say, “It’s time!” and rush you onto the set.

The set is surreal. It’s just like at home, only the other half—the half you have to imagine when you’re at home—is dark and dreary and filled with giant cameras and people with headsets. Or an audience. Depending on the show.

They sit you down and you realize that with the lights in your eyes, you’re pretty much blind. The host(s) is/are still having a conversation with the producers about getting ready, or maybe he/she isn’t there yet, or maybe you’re lucky and get someone nice who smiles and makes small talk with you for a few seconds. (Joy Behar and I talked about alopecia. Seriously. She said, “Oh, do you have alopecia?” and I said, “You’ve heard of alopecia?” and then the show started.)

You hear the music, and that’s when you start to have that feeling like the roller coaster has just left the station and you’re wondering why you let your friends talk you into this thing.

The host starts talking, setting things up, and you find yourself thinking: Don’t do anything stupid. Don’t forget to smile. You call that a smile?! Smile, doggone it! Wait, that’s too much. Don’t be creepy. Where should I put my hands? Am I sitting up straight enough? Wait, don’t fidget. Just be normal. Normal! NORMAL!

And then the host looks at you and asks some question, and you go,

Then that’s a wrap, and everyone says thank you, and you get whisked off and dumped back in the car and driven back to the airport before it occurs to you that it’s over.

On the way home, you find yourself thinking, “Did that really just happen? Have I actually understood?” before catching yourself and realizing those are lyrics from Wicked.

You get home, and wonder whether you should watch yourself on TV, and you finally do, and you’re really critical of yourself, but everyone else thinks you were amazing, or at least they tell you so. They also ask you all about the host(s) of the show you were on:

“What’s Dr. Ellen like? Is she cool to hang out with?”

And you realize with surprise that you have absolutely no idea.

** Special note: Just to be clear, this entry is drawn from several different TV experiences of mine over the years and is intended for humor. Joy Behar and her folks were all extremely nice, no one called me Jane, and my driver did not try to kill me. Also, I didn’t neglect my cat; I don’t even own one. If I did, though, I’d totally call her Jane. Or Dr. Ellen 360. **