Last week, one of my readers asked—very nicely, I might add—about my “Side A” biblical views.

“Side A,” you may recall, is a term sometimes used for people like me who support monogamous same-sex relationships. (“Side B” refers to those who believe such relationships are contrary to God’s design.)

I always feel a little conflicted when it comes up. My work is all about helping Christians lovingly deal with controversies like this one, and the organization I run has both “Side A” and “Side B” members. My goal in life isn’t to take a side and try to convert everyone to my way of thinking; it’s to help people build bridges and treat each other with grace and love in spite of our disagreements. If I spend too much time publicly taking a side, that could harm my ability to do the work I’m most passionate about.

But I also believe that building bridges requires being honest about your own views and biases when people ask. And I know why people ask this question so often; the reality is, most of us Christians have heard biblical justification for a Side B perspective many times, but a lot of Christians have never heard any biblical justification for a Side A perspective.

It doesn’t help matters that many of the Side A biblical arguments out there are, frankly, pretty terrible. They rely mostly on looking for loopholes, trying to convince people that certain passages don’t mean what they seem to mean, and then expecting that to be the whole conversation. Some of the Side A arguments I’ve heard strain credibility to the point of being laughable. This only further reinforces the idea that a Side B view is based on the Bible, and a Side A view is based on wishful thinking.

So when people hear that I’m a committed Christian, that I believe in the Bible, and that I’m Side A, they naturally want to know how I came to that conclusion. When they hear that I came to my Side A views not in spite of but because of my biblical studies, they’re even more intrigued. And since there are many, many, many other Side A Christians (both gay and straight) around the world, it’s to be expected that people who have never heard a biblical Side A argument want to hear my perspective on it.

It’s a complicated subject, though, and a simple blog post can’t do justice to it. So, for those of you who have been asking, there are multiple places you can get my perspective on this. 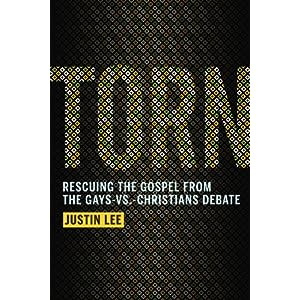 Personally, I think my best and most concise explanation of how I came to my conclusions is in my upcoming now available book, Torn: Rescuing the Gospel from the Gays-vs.-Christians Debate. The book is written for all Christians, both Side A and Side B, but it does include a chapter in which I explain the Bible studies I did and how they changed my view. (No worries, though: even if you disagree with every word of my biblical exegesis, I think you’ll still find the book incredibly relevant.)

You don’t have to buy my book to read my Side A argument, though (but I’d love it if you did!). An earlier version of my argument is on the web, available for free as part of the Great Debate. It’s long and I wrote it a number of years ago, but the basics are all there, and it should give you a pretty good idea of what I believe.

[Updated: I’ve also got a YouTube video on the subject.]

So there you have it, three places you can hear my own Side A interpretation of the Bible and why I believe what I do. Whether you agree with me or not, though, I hope we can agree to continue working together to help the church do a better job of dealing with controversial issues like this one and showing the grace and love we know we’re called to as Christians.