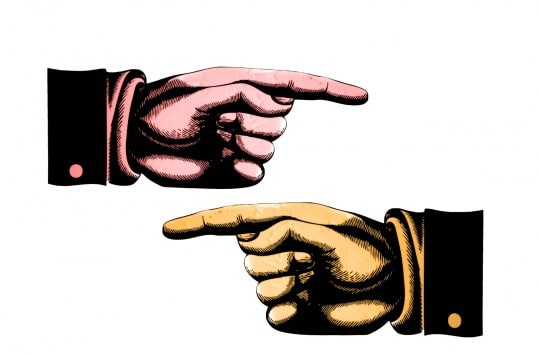 A couple of weeks ago, after the Pulse nightclub massacre, I wrote this post encouraging Christians to speak out publicly with words of sympathy and solidarity with the LGBT community. I heard from a lot of you that you did just that—and I really appreciate it. You never know how much your words may mean to someone else in your life.

But in the days after the massacre, I also saw a disturbing trend among some high-profile Christians: responses that seemed less designed to comfort a hurting LGBT community than to point fingers at Muslims. The shooter was a Muslim, they reminded us, over and over again in their only public response to the tragedy.

This is really problematic for a lot of reasons. As plenty of other commentators have pointed out, it’s not fair to paint all Muslims as somehow responsible for the actions of extremists. But beyond that, I promised in my original post to talk more about why this is such a troubling way for Christians to respond to tragedy—and why it makes Christians look so terrible when we do that.

So let’s start with something obvious: The LGBT community has a history of troubled relationships with a number of organized religions. Although there are LGBT Christians and LGBT Muslims, LGBT Americans overall are very aware that neither of these faiths has traditionally been known for being friendly to the LGBT community. LGBT people have been ostracized, beaten, disowned, and put to death by both Christians and Muslims who believe that God justifies their actions.

So when the Pulse shooter was first identified as a Muslim, of course the LGBT community was going to immediately connect those dots. (And as more information came out about the shooter, we’d ask even more questions about his motives.) LGBT people already knew there were big conversations to be had on that topic.

But in the middle of all the shock and grief, the best thing for Christians to do was to express sympathy and solidarity, to simply say, “I’m so sorry; I know you’re hurting and afraid, and I want to let you know I stand with you.” Tagging a “but” onto the end of that (“…but let me just point out, the shooter was a Muslim”) completely changes the impact of that statement. No longer is it an expression of sympathy; it now sounds like an excuse to point fingers. (“Hey, don’t blame me; I’m a Christian! Christians didn’t do this!”) Even if that’s not the intent, that’s how it comes across.

I understand the desire to point fingers. Many conservative Christians feel that they’ve been blamed for all the problems of the LGBT community, and even in this case, there were LGBT folks talking about how homophobic Christian teachings had paved the way for acts of violence. A natural defensive response to that is to say, “But the shooter wasn’t a Christian!” And it’s true; he wasn’t.

But pointing fingers to take blame off of oneself is how children respond to conflict:
“She started it!”
“He was on my side!”

A mature response in a time like this is to understand the fear, anger, frustration, and deep sense of loss being felt by the LGBT community, and to respond with sympathy or even empathy, not defensiveness. That’s what shows Christians to be living like Christ—and I’m happy to see that many Christians indeed did just that.

Besides, regardless of the beliefs of the shooter in this particular incident, Christians really do need to own up to the fact that many of us are far from innocent in our wrong treatment of LGBT people.

And yes, I’m including myself in that criticism. Before I ever realized I was gay, I said many hurtful things about LGBT people. I had good intentions and didn’t mean to be hurtful; I just didn’t understand things as well as I thought I did. But I was hurtful, and I need to own up to that.

As far as I know, none of my words cost anyone their life (I pray to God that’s true), but Christians have been responsible for the deaths of many LGBT people. In America, the idea that Christians should put LGBT people to death is primarily limited to extremists, but that’s not true everywhere; in countries like Uganda, Christians have lobbied repeatedly to execute LGBT people, and many LGBT people have died at the hands of mobs claiming Christian teachings as their motivation, citing passages like Leviticus 20:13.

Do I believe those people are actually living out Christian teachings? Absolutely not! But if we as Christians only point fingers at the wrongs outside the church without acknowledging that our Christian siblings—and even we ourselves—are also doing great harm, we succeed only in making ourselves look like hypocrites.

That’s why I write so much about ways we Christians could do better. Every time I write a post like this, I get emails from people asking why I spend so much time advising Christians on how to improve without devoting equal amounts of time to criticizing other groups. Doesn’t that indicate some kind of bias on my part, they wonder? Doesn’t that prove I’m “anti-Christian”?

No, actually, it’s quite the opposite.

As a Christian, I want to represent Christ as well as possible, so I hold myself and my brothers and sisters to the highest possible standard. I want us to be the best we can be, so when I see areas where we could improve, I want to lovingly hold us accountable. Anytime I’m criticizing Christians, I’m criticizing myself—these are mistakes that I’ve made myself or that I still struggle with today. If I criticize Christian homophobia, it’s because I was a homophobic Christian myself; I’ve written about that in my book and elsewhere.

There’s also the reality that Christians are my audience. If I criticize Muslims, who’s reading that? I don’t have a large Muslim readership that I’m aware of. So what’s the point? For us Christians to sit around and pick stuff out of other people’s eyes instead of looking at our own? That doesn’t seem right to me.

The best criticisms come from within our own communities anyway. I’m much more likely to listen to fellow Christians talking about how to be a better Christian than I am to listen to a non-Christian telling me what I should be doing as a Christian.

As a Christian, I believe Christianity has something unique and vital to offer the world. I have many, many areas of disagreement with non-Christian teachings and philosophies; that should go without saying. But as a Christian, I also freely admit that I hold Christians to a higher standard. I want to see us be the best possible representatives of our risen savior. So while I do think it’s important for us to know why we believe what we do instead of something else, I don’t think we need to spend our time congratulating ourselves on how much better we are than some other group, while we point out where they’ve gone wrong. Instead, we Christians need to be continually asking for the Spirit’s conviction of our own sin and challenging ourselves to be the best Christians we can be.

Because if we want to show the world what redemption looks like, we’re going to have to start with ourselves.